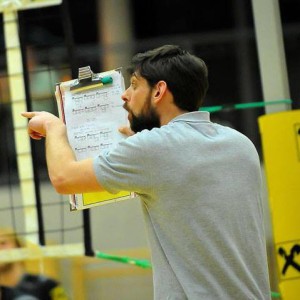 Let’s analyse the Volleyball Olympic Final played in 2006 in Rio De Janeiro between Brazil and Italy. As you probably know Brazil won the Gold Medal beating Italy 3-0. All the game actions played has been divided in CIRCLES, the ORANGE are points SCORED by BRAZIL and the BLUE are points SCORED by ITALY. The STROKE around the circle represent the duration of the action: SMALLER STROKE = SHORTER ACTION / BIGGER STROKE = LONGER ACTION.

Let’s think about a CIRCLE WITHOUT A STROKE: It could be an ACE or a SERVICE MISTAKE.

The visualisation is been divided set by set to show patterns that represent the match in a different and hopefully more interesting way.

IN THIS CASE THE  POPPED UP CIRCLES REPRESENT THE BEST “POINTS IN A ROW SERIES”.

Brasil scored 6 points in a row. The first point (Circle has no Stroke) is a Service Mistake by Italy. Interesting is the second point of the serie: a very long action won by Brasil that could have changed everything if Italy scored that point. The penultimate point is an Ace by Brasil. QUESTION:

Can you see other interesting “points in a row series”?

It is still Brasil to score the longest series of points in a row. The second point is again a really long action. QUESTION:

Can you see other interesting patterns?

This set look balanced between the two opponents. Italy had the best serie winning short actions (check the strokes). QUESTION:

What’s the difference with the other 2 sets?